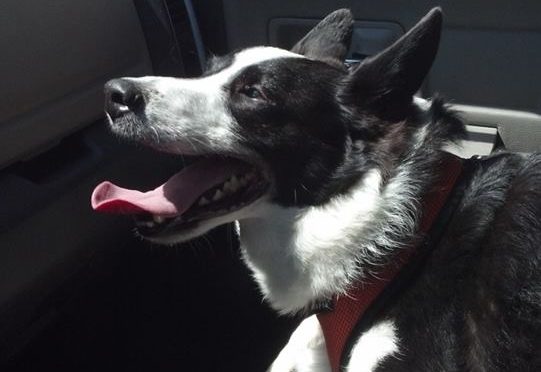 I put down my best friend today. He passed away at 1:12pm. As much as you may think you are prepared for something like this, how the hell are you ever actually?

Huckleberry was my first dog. I was rooming with a co-worker when I found him. Without going too far in the rabbit hole, here’s the break. I was 20 years old, depressed and alone. I had the notion to get a dog because my family always had one. I just thought it was what you did I guess, I liked the image. I found a rescue in Ohio (I don’t remember the name) and made the drive up to see them in person. I was immediately drawn to him.

He was cowering in the corner of his pen but with a little coaxing he came cautiously to the front. I took him for a walk around the yard of the building and he seemed to warm up considerably. We were sold on each other.

He was with me for everything, went everywhere with me that I knew I could take him. I seldom used a leash with him because we just didn’t need it. Hikes, walks, car rides for errands, didn’t matter. With his nose out the window (he always had the passenger seat. Even with people passengers) he would know we were close to the dog park. Pioneer park was his favorite because of how much he enjoyed getting in the creek and swimming. He rarely had an altercation with other dogs. Except for my sisters chihuahua. That dog sucked. Huck knew it. When I adopted Archie as a puppy he was as patient as you could have asked. The same with any small kids that were around. Nieces, nephews, all could climb all over him and he never batted an eye. He was there for me through everything. Break ups. Losing one of the biggest jobs of my life. Any bad days. He carried this to the end, always smiling his own smile. Which is what made this so hard I think.

A year or two ago he started limping. His right front shoulder was getting arthritis. It was easily controlled as it would only flare up after extended days running, such as staying too long at the dog park or the gym. A little rest and he would be back on his feet. A few months later with the problem still persisting and we moved on to anti-inflammatories from the vet. But he still took it like a champ, still running and playing like he was a pup. A year ago he ended up having a flare up of cataract in his eye, it came very suddenly. He was unable to see out of it at all. I never noticed as it didn’t slow him down. There was a surgery available but with his now advancing age and that it didn’t seem to affect him at all, I opted not to get it.

At this point I’m starting to notice the lumps. There’s popping up all over his body. They’re mostly just fatty tumors, soft and squishy. Again, no decline in quality of life as they don’t hurt him. The vet says nothing to worry about, old dogs get lumpy sometimes. It happens to us all I guess. This November is when I noticed the lump growing on his neck. In the matter of four weeks, it grew to a ridiculous size. The week before Christmas, the damn thing has outgrown its blood supply and turned necrotic. An emergency vet visit gets it cleaned out and bandaged. Still his tail is wagging.

A month later I take him in to his regular vet for his update on shots so we can board him. We’re going on a ski-trip in a month. On this visit, he gets passed with a clean bill of health. He’s just told he’s getting old. (The nerve)

The next day he falls down in the kitchen. I attribute it to the hardwood floors being slippery for paws but now he can’t get up. It takes him quite a while after being put back on the carpet to find his feet. The day after this, he can’t stand at all unless picked up and placed on his feet. I schedule the next available appointment to get him in.

He’s seen, prescribed anti-inflammatories, a muscle relaxant, and pain relief. We hope for the best.

Five days later, he can no longer walk or control his lower (back) half. The vet sends us to a surgeon. Her evaluation is this: His condition is one of three things. Two of them would require surgery, the third is incurable. At his age, the surgery’s themselves may end him and even if successful, may not bring back his function anyway. It’s now time to think about his quality of life. The day his legs stopped working I started thinking about that. He’s always been so active, not being able to move must be torturous. But to hear someone else say it, then another vet. He can’t even walk, but his tail is still working. Feebly, but it still wags as these strange people are moving him from room to room, poking and prodding him.

On Thursday, I called my vet again. I’ve never had to do this. I need help. What do I need to do? “Just call me whenever you’re ready. Tomorrow, the weekend, next week. Take all the time you need with him.” So I did. Every day he’s getting weaker now though. It’s absolutely heartbreaking to see.

I make the call Monday morning. We’re coming in at 1. I’ve cried sporadically for a week now. Looking at him, thinking of him, hearing his weakening bark. He can’t even get off of his bed for the last two days now. I bring him to the gym with me in the morning. It’s not for me, I don’t need the sympathy. It’s for him. He absolutely LOVES coming in to the gym. I’ve done everything I can to make his final days as enjoyable as possible.

Every person that asks about him, I almost break down answering. I don’t even get him out of his bed now, I just carry the whole thing. He’s carried into the vets office today this way. The staff knows why I’m here of course, I’ve known them for over 10 years now. Placing him (in his bed) on the table I start to weep. The nurse asks for my signature, I sign. I can’t even see the damn paper. They say to get them when I’m ready, to take all the time I need. His final night sleeping in his usual spot.

I’m just a blubbery mess now, crying into my dog’s fur. He’s covered in everything I wasn’t able to wipe off of him coming in. The tumor on his neck broke open again and is bleeding profusely. He lost control of his bowels over a week ago. As I’m hugging him, telling him I’m sorry, he just licks me. In his last moments, it’s HIM that’s giving ME support. When the injection was applied he just calmly looked at me the entire time. Like he was accepting it. Did he know?

I wish he knew. That that’s what I’m sorry for. I’m sorry I couldn’t help him. That I couldn’t make him understand. I’m sorry that he was brought down to this position, sh*tting on himself. I”m sorry he couldn’t run anymore when I know he wanted to so bad. All the times he fell off the bed or the couch in the last two weeks and couldn’t understand why part of him wasn’t cooperating with the other part. I would give anything to make him know.

Is it cliché? It’s true, whether or not it’s cliché. I rescued him from a shelter, but he also rescued me, saved MY life. I’m so sorry, my friend. I miss you so much already but I’m glad you’re no longer suffering. You are the best, fluffy, lumpy, happiest f*cking dog I could have ever imagined. I’m not going to remember you as you were today (though I’ll never forget it). I’m going to remember you as you wanted to be. I never deserved you.